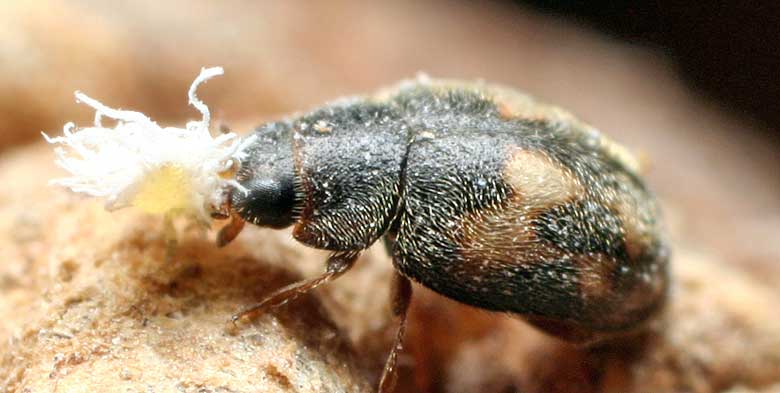 Nephus conjunctus is a small ladybug very effective as mealybugs predator that belongs to the family of Scymninae as well as the best-known Cryptolaemus but it is smaller, as the adult sizes just a couple of millimeters. The body is slightly pubescent, dark brown with 4 characteristic nut-brown spots. The larvae are covered by the typical white wax in irregular flakes which allows them to camouflage among the preys.

Nephus is an endemic european species and is able to prey the majority of species of mealybugs present in our habitats in a very wide thermal range that covers the period from April to November. Unlike the cryptolaemus Nephus is active even at low pest density and it’s can be released early, in addition, due to its small size, it’s able to seek mealybugs also in bark shelters such as on grape.

Nephus is available in packs with 250 adults that may be released directly on the plants or close to possible hotspots. The rate ranges from 5 to 20 individuals plant depending on the plant size, to be increased if mealybugs are already present in hotspots.