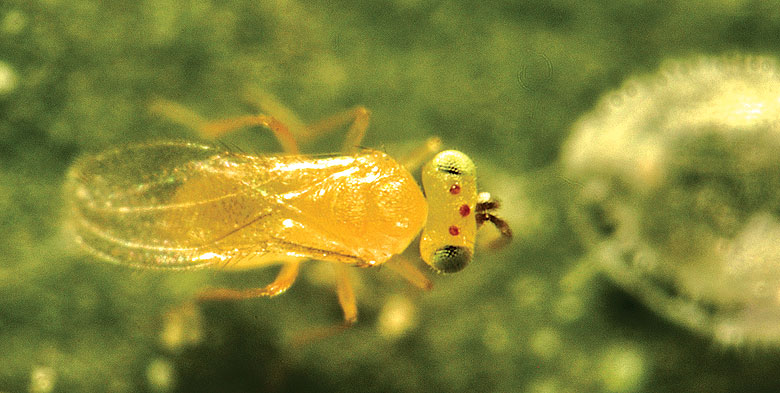 The adult of eremicus is completely yellow with greenish eyes, and is able to control both the species of the protected crops whiteflies. Differently from Encarsia formosa, its population is composed by males and females and the host-feeding activity it’s less pronounced, but this insect is much more adapted to warmer temperatures and generally to the periods with wider thermal excursion. The parasitized whiteflies become amber coloured and slightly bulgy, besides it’s possible in transparency to notice the progressive development of the adult of eretmocerus that will emerge through a circular hole.
The adult female under optimal conditions of around 25°C may actually live up to a dozen of days during which 50 and more eggs may be laid. The egg is inserted below and outside it but the young Eretmocerus larva penetrates soon the host and kill it when reaches the pupal stage.

EremiPAK is available in bottles with 3000 or 15000 individuals, containing pupae from which the adult comes out in short time. The programs of release are based on several repeated introductions with total rate from 12 to 20 individuals for m2 or more according to the situations, in order to allow a progressive establishment of the parasitoid in the greenhouse and achieve the control of the pest.