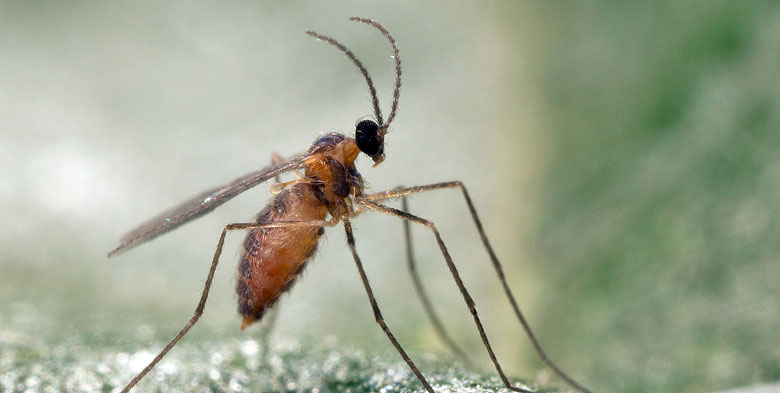 Aphidoletes aphidimyza is one of the midges in the family Cecidomidae that at larval stage shows a predatory behaviour in particular on many species of aphids. Newly emerged adults mate on various sites among them spider webs where they are protected by predators and can easily move thanks to the long legs. Right after, the females are attracted by the aphid colonies where they land to lay one or more eggs according to the aphid’s density. The larvae are orange coloured wormlike and not much mobile but able to kill the surrounding aphids even more than necessary to feed. Once their development is concluded, in around ten days, they fall down to the ground where pupate covered by soil particles.

Aphidoletes has to be introduced timely or at first presence of aphid colonies; according to the situations its use in biocontrol may be integrated with more specific aphid’s natural enemies like the parasitoids of the genus Aphidius. This midge likes the mild temperatures so its use is better addressed to the periods with minimum 15°C, like occurs in the greenhouses or from late spring till autumn.