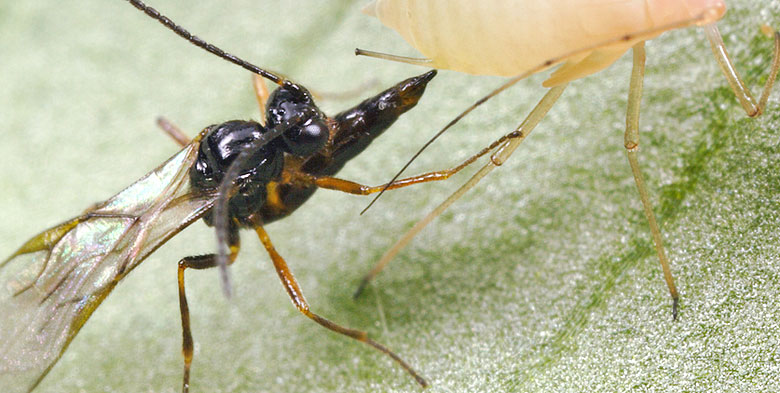 Aphidius ervi is an Hymenoptera Braconidae common parasitoid of different genus of aphids like Macrosiphum, Aulacorthum, Acyrtosiphon and others, all of which are characterized by larger dimensions in respect to the hosts preferred by the close species A.colemani. In the adult stage, it measures 4-5 mm and has a blackish body with the long antennas typical of the family.

A.ervi is a solitary parasitoid and performs the entire larval cycle within one aphid. The adult females are provided with a high capacity to search for aphids in which they lay their eggs with rapid movements of the abdomen. The aphid thus infected with parasitoid does not die immediately but is slowly devoured from the inside and then eventually swells assuming the characteristic appearance of the brown “mummy”.

ErviPAK250, which contains mummies or freshly emerged adults, is used for the biological control on horticultural and floricultural crops. The introductions should be early and timely with a series of releases, even low doses but already starting in the period in which is forecasted for the appearance of the aphids.