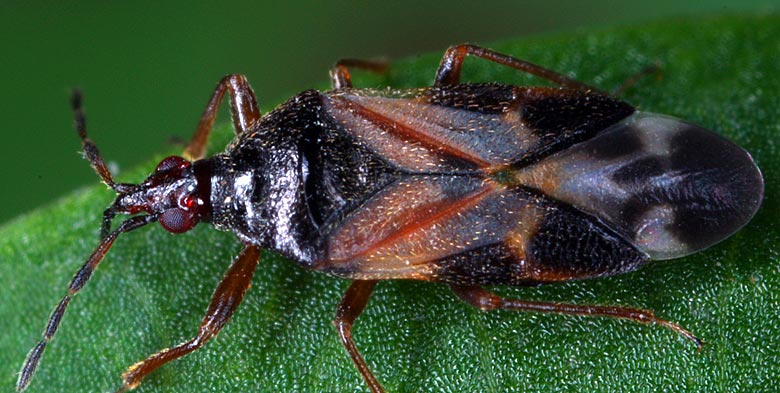 Anthocoris nemoralis is the more abundant and efficient controlling factor of Cacopsylla pyri, the ‘Pear psylla,’ in Europe. It is a polyphagous predator that can be found in many crops or wild plants other than pear orchards.

It hibernates as an adult in protected locations, finding a shelter in bark crevices, dead wood or dead leaves. In spring when temperature is frequently above 10°C the female starts egg laying on the first green vegetation (leaves or buds). Eggs are inserted in the tissues under epidermis. The first larval generation starts development eating small psilla (eggs and larvae). There are five larval stages and three generations per year. This specie can survive very well preying on pests like: aphids, moths, mites and others.

Bottles each containing 500 adults in dispersal material are released in the spring season. The bugs are very mobile and can fly very well so 5-6 release points per hectare are enough to have a good dispersion. The basic aim of the release program is to establish a higher predator population earlier than the naturally occurring, reducing the chemical pressure on the crop. A good release quantity is around 2,000-3,000 adults/hectare.