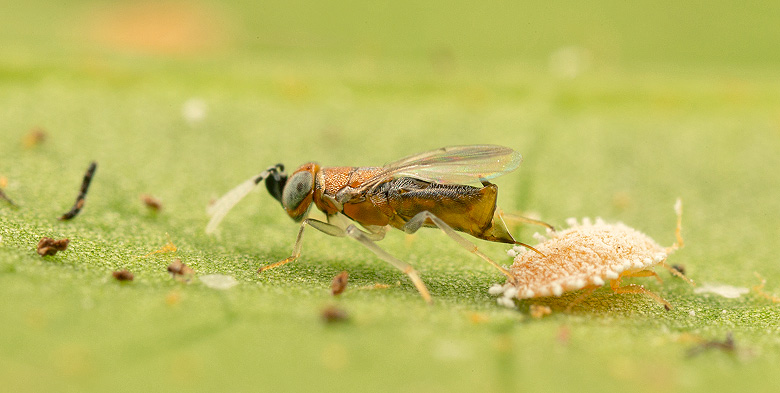 Anagyrus vladimiri (formerly known as A. near pseudococci) is an Encyrtidae Hymenoptera that lives as parasitoid of mealybugs. The adult female, approximately 2 mm, has a characteristic coloring of rust brown with a peculiar grayish strips on the back and characteristic white antennas whose scape is large and disc shaped and almost completely black as well as the first two articles of the flagellum. The male is smaller and black with regular antennae full of bristles. The legs are clear in both sexes.

Anagyrus vladimiri is a typical species of the Mediterranean basin where it is active from spring until autumn and makes several generations with cycles of about 3-4 weeks. It is used in biological control programs for grapes and citrus fruits as well as on ornamental plants also in greenhouses against Planococcus vitis and Planococcus citri.

The females lay eggs inside second and third stage mealybug but also into immature or gravid adult females. Their search capacity is very high and they therefore act even at low level of infestation and can therefore be used for early introductions starting from April in open field.

Anagyrus contains 250 adults parasitoids that have to simply be released near the plants for a fast action without the risk of predation by ants. The rate ranges from 2,00 to 3,000 individuals per hectare depending on the circumstances. In case of infestations already evident its use can be well matched to that of the predator Cryptolaemus.