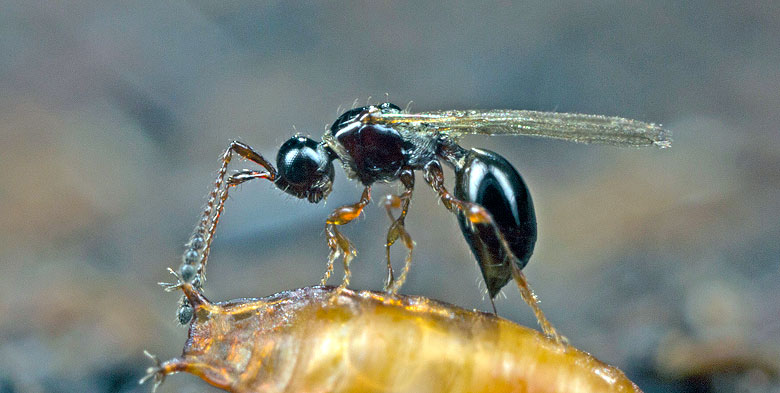 This small wasp, a parasitoid of flies of the genus Drosophila distributed worldwide, has showed a quick adaptation to the new host, the Spotted Wing Drosophila. The females of Trichopria seek for Drosophila suzukii pupae and lay an egg inside the developing larvae that are promptly killed. Contrarily to other parasitoids, Trichopria drosophilae is able to overcome the strong immune response exhibited by the SWD larva, and after a full development, a new adult parasitoid emerges from the pupa drilling an hole on its surface. Each Trichopria female can kill up to one hundred SWD with a life cycle of around 3 weeks. Trichopria is the result of a cooperation among several research institutes, with the aim to introduce a clean solution to the uncontrolled invasion of the exotic pest in Europe. Trichopria drosophilae is intended for an use based on repeated and preventive releases into the crop but also around it and even before the crop is attacked, in order to establish a population of enemies to hinder the development of D.suzukii. Trichopria is a species present in most of Europe which though cannot be found in all habitats. It must constitute the basis of a real integrated pest control strategy based not only in pesticides but which could actually reduce their use.